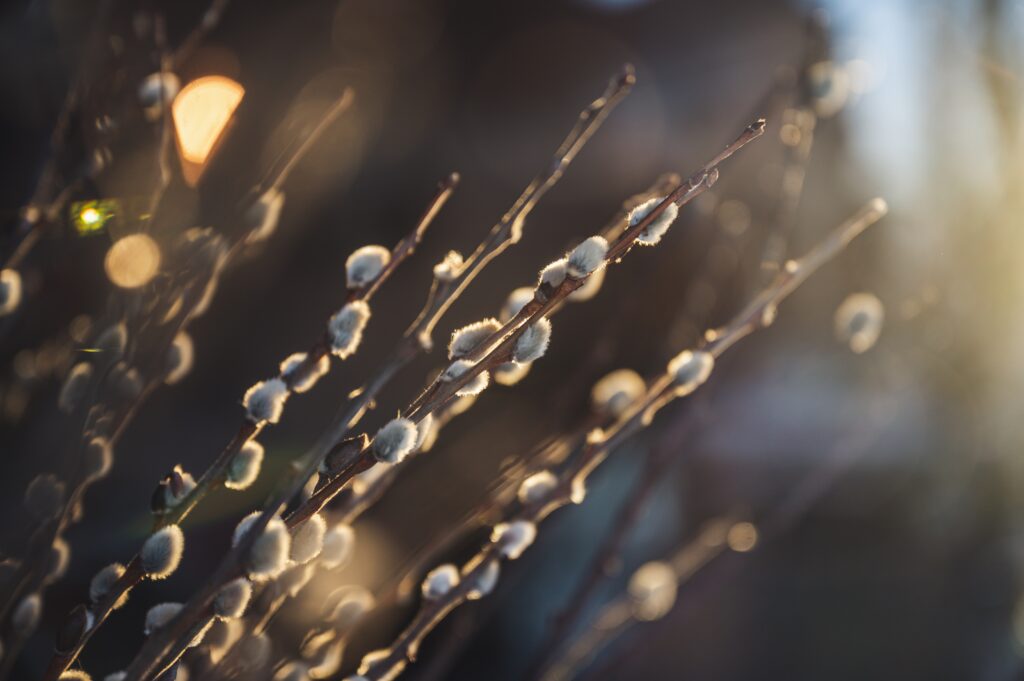 Easter might be strongly perceived as both a Christian and a commercial holiday in the modern day, but at least here in Finland its pagan and non-religious roots live on in our traditions even now. While many of the common commercialised aspects are at least partially non-Christian, the Finnish Easter is much more than crosses, eggs and Easter bunnies – although we have those elements nicely jumbled up with everything else, as well.

Shall we take a look at some of our local flavour to this holiday?

Above all else, Easter is a celebration of the spring. Nature is waking up, we get more and more light each day here in the Northern Hemisphere, mating season kicks off for many animals. New life and fertility is at the centre of many pagan traditions. The eggs and bunnies are both symbols of this but neither are unique to Finnish culture. However, what is very much a distinctive feature in our tradition is rairuoho.

Rairuoho is ryegrass grown in a small container just in time for the Easter holidays. As Finland doesn’t usually get green grass in most places by Easter, we’ve had to improvise a bit. Luckily, there are plants such as ryegrass that are very easy and fast to grow, so people can have a nice green patch right inside their homes, to remind them and celebrate that spring is just around the corner. Often the rairuoho is decorated with faux chicks and/or painted eggs.

Some people like to watch the world wood burn

Easter bonfires are celebrated in many Christian countries around the world. The reason why they’re still worth mentioning here is the folklore behind them (in addition to the liturgical meaning). Also, while they are admittedly more of a Midsummer (juhannus) and May Day (vappu) tradition, in the Ostrobothnia area Easter bonfires are still an essential part of the holiday celebrations. Since Resistance Games is based in Oulu, in Northern Ostrobothnia, we get to enjoy a local bonfire here as well!

Watching a fire can be very calming, especially when you can do it with your loved ones, preferably with a beverage of your choice somewhere nearby. Apparently, someone somewhere thought that was not reason enough to enjoy a good old bonfire every now and then, so the official reason for lighting them was to ward off witches and evil spirits. The more smoke and sparks, the more efficient the bonfire was as a safeguard, as they believed the spirits wouldn’t be able to pass through the smoke and sparks.

And speaking of witches…

No tricks, only treats

Before we adapted the North American Halloween traditions to our annual holiday routine, we already had a similar tradition in place: children dressed as witches, going from door to door, blessing each household with their decorated pussy willow branches, receiving treats and/or pocket change in return. These witches are known as trulli in Finnish, and the act of blessing itself virvonta or virpominen.

Part of the fun is preparing for the event by gathering your own branches and decorating them with coloured faux feathers and wrapping tissue. As for the outfit: typically tacky clothing from decades ago works best in creating the perfect aesthetic.

The most common version of the rhyme goes as follows:

How about the origins? Well, Easter witches are the perfect example of Christian and pagan traditions melding into one. Partly it’s associated with Palm Sunday but at the same time witches are obviously not quite straight from the Bible. That part is of older origin, as waving around branches to ward off evil spirits is very common in Finno-Ugric cultures. Historically speaking though, witches weren’t seen as benevolent – quite the opposite – so it’s quite curious how they ended up being represented as the ones giving out blessings against the very evils people used to believe they caused.

In modern times Halloween has added its own touches to the tradition, as many children choose to dress up as bunnies, wizards, or other characters instead.

Every culture seems to have that one food that they love to make foreigners eat and watch their disgusted reactions. While most of us do enjoy our salmiakki and licorice as a treat as well as a shock treatment for unsuspecting visitors from abroad, nothing divides opinions more than our native Easter specialty, even among Finns: mämmi.

Traditionally it’s made of mainly water, rye flour, and powdered malted rye. Some recipe variations use potato as the main ingredient. It’s a sweet dessert usually served with milk or cream and sugar. Originally it was served in containers made of birch bark (tuokkonen), but nowadays most people buy their mämmi from the grocery store in carton boxes. Some brands still honour the original containers by including birch bark print in their packaging.

And yes, we’re very aware of what it looks like.

While mämmi’s origins are tied to Catholic traditions, it seems to be fairly unique as far as Easter cuisine goes. Unfortunately/fortunately (depending on whether you love it or hate it), it hasn’t gained any substantial international foothold – apart from Sweden, where it’s probably mostly made available for the sizable immigrant minority with a Finnish background.

Would you try it?

Hopefully you enjoyed this brief look into some of the mostly-not-Christian Finnish Easter customs we have. Learning about different cultures is not only fun but also helpful in giving context to creative works from creators from a different background than you.

If you want to read more about Easter in Finland, here are some places to find further information in English:

We use cookies on our website to give you the most relevant experience by remembering your preferences and repeat visits. By clicking “Accept”, you consent to the use of ALL the cookies.
Do not sell my personal information.
Cookie SettingsAccept
Manage consent

This website uses cookies to improve your experience while you navigate through the website. Out of these cookies, the cookies that are categorized as necessary are stored on your browser as they are essential for the working of basic functionalities of the website. We also use third-party cookies that help us analyze and understand how you use this website. These cookies will be stored in your browser only with your consent. You also have the option to opt-out of these cookies. But opting out of some of these cookies may have an effect on your browsing experience.
Necessary Always Enabled
Necessary cookies are absolutely essential for the website to function properly. These cookies ensure basic functionalities and security features of the website, anonymously.
Functional
Functional cookies help to perform certain functionalities like sharing the content of the website on social media platforms, collect feedbacks, and other third-party features.
Performance
Performance cookies are used to understand and analyze the key performance indexes of the website which helps in delivering a better user experience for the visitors.
Analytics
Analytical cookies are used to understand how visitors interact with the website. These cookies help provide information on metrics the number of visitors, bounce rate, traffic source, etc.
Advertisement
Advertisement cookies are used to provide visitors with relevant ads and marketing campaigns. These cookies track visitors across websites and collect information to provide customized ads.
Others
Other uncategorized cookies are those that are being analyzed and have not been classified into a category as yet.
SAVE & ACCEPT