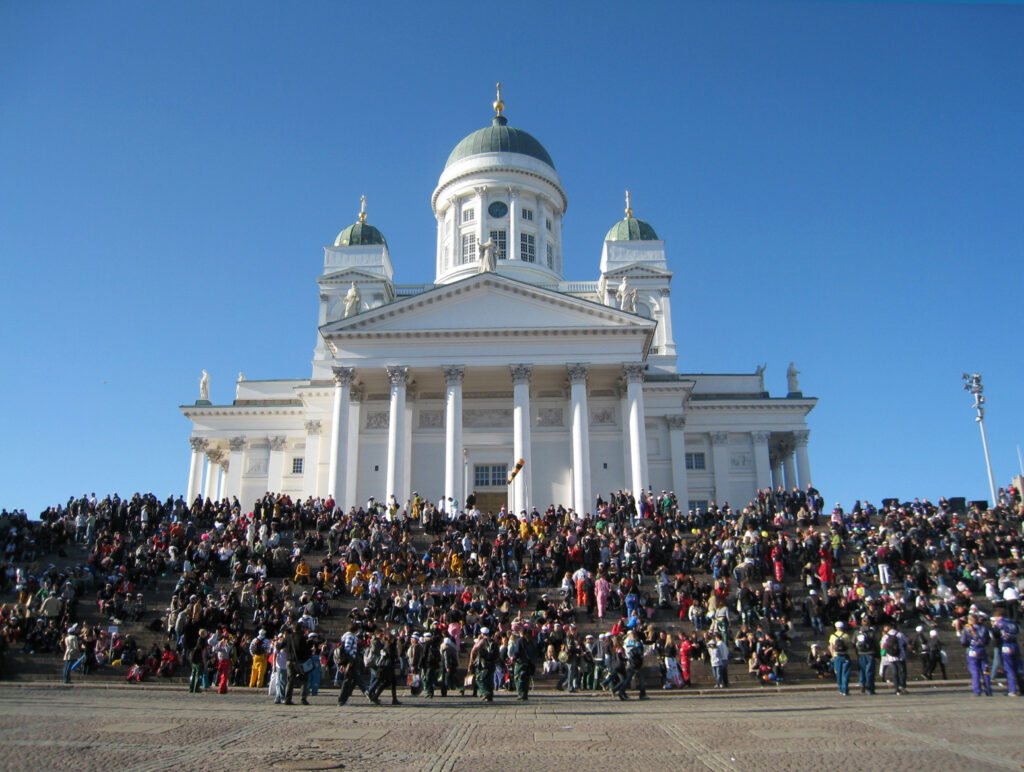 Okay, the distress call might not exactly have anything to do with the holiday. Having one more association thrown in would not make much of a difference, though: if you read our previous blog post about Finnish Easter, you might have noticed our traditions are a beautiful mess of Christian, pagan and secular customs. This is true for May 1 as well, and is reflected in the wide variety of names with which you can refer to it as well: vappu, toukojuhla, May Day, International Workers’ Day, Walpurgis Night… “a dear child has many names”, as we say over here.

Let’s take a closer look at how this particular celebration looks like in Finland.

Spring, a saint, and socialism walk into a bar…

Originally, just like many other cultures in Europe, the ancient Finns celebrated the coming of spring around this time of the year. Back then this springtime feast was called hela. Similar to Gaelic traditions, bonfires (helavalkeat) were lit to keep witches at bay, and cattle were made to run over fire to the pasture to protect them from illness. Children ran around ringing bells, warding off evil spirits. The effectiveness of these wards against the supernatural is debatable, but they did help keep the predators away at least. Celebrations included mead and dancing – traditions that persist to this day. Bonfires are still lit as well but only in the Swedish-speaking parts of the country for the most part.

In the Middle Ages, as the Catholic church had spread throughout the country, the day became a feast in honour of St. Walburga. This is also where the modern name for the holiday, vappu, comes from. Interestingly enough, while the name is derived from a Catholic saint, that’s pretty much the only connection the celebration has anymore to Christianity.

The modern vappu is now mostly about International Workers’ Day, or Labour Day. The date was originally chosen to commemorate the Haymarket affair in Chicago, although North American people celebrate workers’ rights in September. At the time the working class got a big win when after relentless protests and strikes the 8-hour work day standard was established. In Finland it has been a national holiday officially called “day of Finnish labour” (suomalaisen työn päivä) since 1944.

The biggest university student event of the year

While workers’ rights are still an important theme, one of the most visible elements of vappu are students celebrating the end of the school year, wearing overalls covered in patches, donning their white graduation caps, usually seen with a drink in hand.

Engineering students in particular are known for their peculiar traditions. Freshman year students in many cities go through an initiation ritual that often involves getting soaked in a lake, river, sea, or fountain. After the ceremony they are “officially” entitled to wear the cap of their respective field of study instead of the generic secondary school graduation cap.

They also sell leaflets of humour relevant to current topics (vappulehti). The publications are different for each city, and the faculty that publishes it differs as well. Our local vappulehti here in Oulu is called Ööpinen and it’s published by the architecture students. By the way, it’s the second oldest publication of its kind in Finland!

One of the most well-known student traditions is the capping (lakitus) of a local statue, most notably Havis Amanda (or just Manta) in Helsinki. The Oulu equivalent is the sculpture of Frans Michael Franzén, our oldest public monument. When the statues receive their caps, vappu has officially begun.

Fun and games for the whole family

Vappu might be best known as a celebration for students and the working class, but people of all ages and backgrounds can and do join in the fun. There are plenty of activities to enjoy whether you’re spending time with your family or going out with friends. Despite its rural roots it’s nowadays an urban festival with parades, marches, concerts, and political speeches.

Similar to Halloween, a lot of people like to wear masks or wigs, or dress up in funny costumes. Balloon vendors in marketplaces are eager to put a dent in every parent’s wallet with balloons from every imaginable popular franchise the children are into: Pokémon, Moomin, Disney, Paw Patrol, super heroes…you name it. The air is full of carnival spirit, and since all actual carnivals start their summer season in time for vappu, some people go to carnivals if one happens to be nearby.

Popular decor for children (and adults!) are pom poms, serpentine streamers, pinwheels, confetti, party blowouts, and colour spray for hair. An annual charity fundraiser for child protection services takes place every year in the form of vappukukka. It’s a small, plastic mayflower pin with a different design every year. They’ve been around since 1908 and are the oldest charity product still available.

No party without food and drinks

Vappu is not in its modern incarnation a feast in the same sense as say, Christmas, when it’s customary to have a dozen different dishes and people eat heavily for days. Instead, the traditional consumables are mostly treats and drinks: funnel cakes (tippaleipä) and sugary doughnuts (munkki), mead (sima) and sparkling wine. The only common “proper” dish is potato salad, served alongside something quick and easy to make. In a nutshell, it’s a festival and a festival is a permission to eat trash food.

If the weather and temperature allows it, many people – especially students – have a picnic in a park, especially in the southern parts of the country. This year seems to be a pretty good year in terms of weather: it hasn’t rained (or snowed) so it’s dry, and while it’s not exactly warm by Central European standards, it’s not freezing either, so there’s most likely plenty of folks out there enjoying a nice spring day throughout the country.

Vappu is one of the four big holidays in Finland (alongside Christmas, New Year, and Midsummer) and we hope this gave you a bit of further insight into our culture again.

We use cookies on our website to give you the most relevant experience by remembering your preferences and repeat visits. By clicking “Accept”, you consent to the use of ALL the cookies.
Do not sell my personal information.
Cookie SettingsAccept
Manage consent

This website uses cookies to improve your experience while you navigate through the website. Out of these cookies, the cookies that are categorized as necessary are stored on your browser as they are essential for the working of basic functionalities of the website. We also use third-party cookies that help us analyze and understand how you use this website. These cookies will be stored in your browser only with your consent. You also have the option to opt-out of these cookies. But opting out of some of these cookies may have an effect on your browsing experience.
Necessary Always Enabled
Necessary cookies are absolutely essential for the website to function properly. These cookies ensure basic functionalities and security features of the website, anonymously.
Functional
Functional cookies help to perform certain functionalities like sharing the content of the website on social media platforms, collect feedbacks, and other third-party features.
Performance
Performance cookies are used to understand and analyze the key performance indexes of the website which helps in delivering a better user experience for the visitors.
Analytics
Analytical cookies are used to understand how visitors interact with the website. These cookies help provide information on metrics the number of visitors, bounce rate, traffic source, etc.
Advertisement
Advertisement cookies are used to provide visitors with relevant ads and marketing campaigns. These cookies track visitors across websites and collect information to provide customized ads.
Others
Other uncategorized cookies are those that are being analyzed and have not been classified into a category as yet.
SAVE & ACCEPT